14.07.2020
At their highest, monthly visits to K Group’s online grocery stores increased by over 800%* during the coronavirus epidemic restrictions this spring. In addition to an increase in user numbers, changes could also be seen in ways people use online grocery services. While home deliveries per month grew at their highest by some 500%, the growth in pick & collect services exceeded 2,000% at one point. Of the customer segments, online grocery shopping increased the most among seniors and adult households. 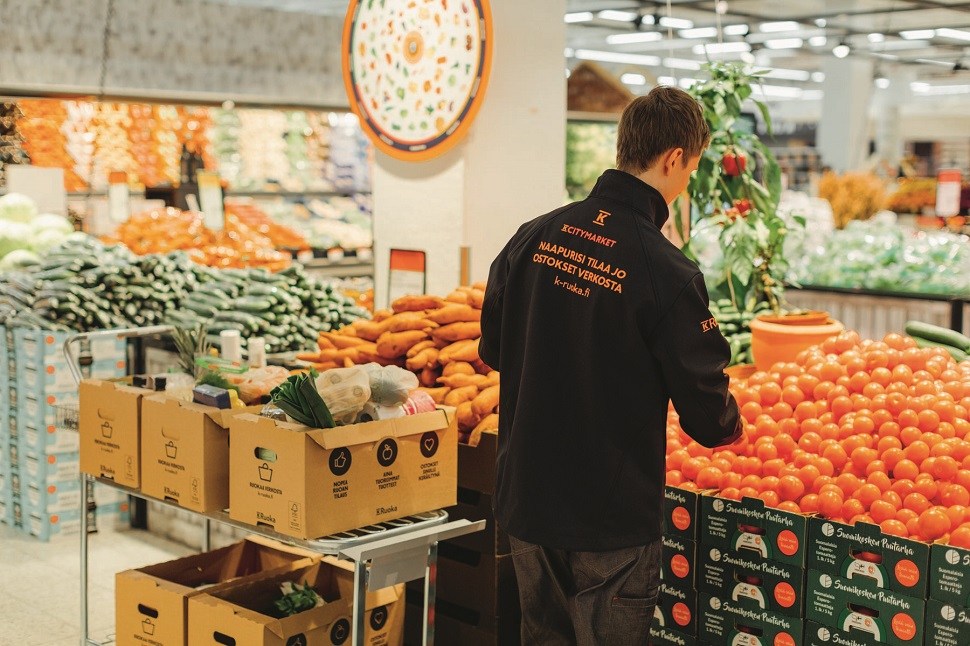 After the busiest weeks this spring, K Group’s online grocery growth numbers have come down to a more moderate level, but the number of online transactions is still almost six times that of June 2019. This means that customers who began ordering their groceries online in the spring have kept it up.

“People who first tried out online grocery services this spring have been twice as likely to order online again as those who tried it before. Many people now see how online shopping can make everyday life easier, with someone else putting together and packing your groceries, even delivering them to your door,” says K Group’s Chief Digital Officer Anni Ronkainen.

During the spring, a big surge could be seen in the popularity of pick & collect services, where store staff gathers the items and customers pick up their order from the store. While the highest monthly increase in K Group’s online grocery shopping was 800% year-on-year, growth in pick & collect services was 2,000% at its highest.

Seniors began ordering groceries online – and have not stopped

Before the epidemic, seniors accounted for some 10% of all online grocery customers. During the strictest restrictions, the figure rose to some 25% - and has stayed there in June.
“It will be interesting to see if this is a lasting change. It’s possible that many seniors who first tried out online grocery shopping during the epidemic will consider it a good way to do their shopping also going forward,” says Ronkainen.

K Group’s data shows that seniors really did comply with the restrictions imposed in the spring, as visits by seniors with a K-Plussa card to K-food stores decreased by 5 million. People visited the stores less frequently and many began shopping online – buying more in one go.

Families with children continue to be the biggest customer group online, as they account for 40% of all online grocery orders. Before the epidemic, the figure was closer to 60%.

*Highest number of visits / month during the restrictions compared with the year before.

29.04.2021 13:00
The year of the pandemic was a great year for bottle collection – customers returned 614 million cans and bottles to K-stores for recycling

When Ville Kestilä, retailer at K-market Tervapata, discovered that serious bullying among schoolchildren was going on near his store, he decided to do what he could as a retailer: The K-Market was declared a bullying-free zone and a safe place for t...

A survey commissioned by the Association for Finnish work, Ruokatieto association and Finnish Glasshouse Growers’ Association shows that during the coronavirus epidemic, the majority of Finns want to buy products and services that provide work for Fi...

K Group customers can now use the K-Ostokset service to examine how much they are consuming, for example, sugar or vegetables. Customers can compare their data to national nutritional recommendations and set themselves objectives for consumption. Bef...

According to its new climate goals published in the spring, K Group aims to be carbon neutral in 2025 and reduce emissions to zero by 2030. Matti Kalervo, Vice President for Corporate Responsibility at Kesko, tells us more and how the goal will be ac...