29.03.2022
K Group reached its target of decreasing food waste by 13% from the 2016 level by 2021. In addition to systematic selection management, K-stores’ innovative solutions, such as loss-preventing discount shelves and the increasing amount of products that make use of food that would otherwise be wasted, as well as the popularity of red-flagged discounted products, played important roles in reaching the target. 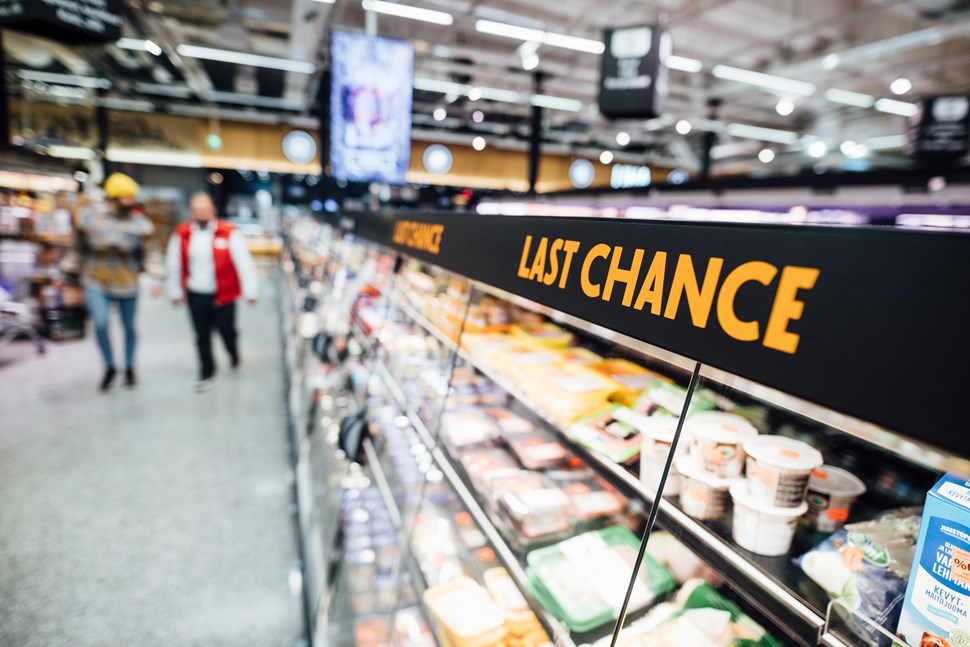 “We move products for which the sell-by date is approaching to separate discount shelves. This way, customers can easily find products with red discount markings in one place. With these dedicated shelves, the amount of food waste can be reduced by as much as half. That’s why this practice has been widely adopted. Of the K-food stores that responded to our survey*, one in four has a separate discount shelf for the purpose of decreasing food loss”, explains Timo Jäske, Sustainability Director for Kesko's grocery trade division.

The growth in the sales of discount-labelled products also reflects consumers’ interest in participating in the effort to fight food waste. Of the customers who responded to a survey** carried out by K Group, 82% said that they were committed to decreasing food waste through their own actions.

In terms of the number of products sold, the most popular products marked with red labels last year were bread, ready-to-eat food, meat, yoghurt, pudding, dairy products and products available at the service counter.

K Group continuously seeks ways to turn food loss into new products. At the end of last year, Finland’s first festive glogg made from expiring food was introduced at K-food stores in collaboration with the juice producer Thrsty. It follows previously introduced Hyvis juices, similarly aimed at decreasing food waste. During the collaboration that started in 2020, more than 60,000 kilograms of fruit and vegetables from K Group’s central warehouse that were not fit for sale have been utilised.

K-retailers also actively innovate their own products that make use of otherwise wasted food.

“Bananas that have ripened so much that their colour has turned dark are often not accepted in the shopping basket, but it would be a shame to dispose of them as organic waste. Over the past couple of years, we have collaborated with the local Leipomo Jyvä bakery. They turn our dark-coloured bananas into vegan banana cake. During our collaboration, approximately 1,500 kilograms of food that would otherwise have been lost has already been used as raw material. The tasty cake has become one of our most popular bakery counter products. It is already being sold at six K-stores in Tampere’’, says Mikko Valtonen, the retailer at K-Market Vellamonkatu.

Reducing food waste is linked to K Group’s climate targets of being carbonneutral by 2025 and cutting the emissions of its own operations to zero by 2030. K Group’s target was to reduce food waste by at least 13% from its 2016 level by 2021, and this target was achieved.

“Food waste is a major global problem, and we actively work to reduce it. About 1.2 million people in Finland visit K-food stores every day, so what we do has a large impact”, Jäske says.

The most important methods of preventing food waste are selection management and forecast and demand planning. It is not pure chance which products end up on K-food stores’ shelves; it is the result of precise data analysis and store-specific selection management. Transport and store logistics have also been optimised to ensure that food waste is kept to a minimum.