“K Group prides itself on its Finnish selections and we support Finnish food production with many tangible means. One of these is the 'Thank the Producer' operating model, which we hope will increase appreciation for Finnish food and food producers. Key to this is collaboration, which is why we are thrilled to have new companies and their branded products join the operating model,” says Ari Akseli, President of K Group’s grocery trade division.

From February onwards, 14 selected products by Berner, Helsingin Mylly, Jalostaja, Snellman and Vaasan are included in the operating model, thus bringing the number of 'Thank the Producer' products up to 65.

Under the operating model, K Group paid an additional of 650,000 euros to Finnish food producers in 2018. The money was paid to the producers of the main ingredients of 'Thank the Producer' products through the product suppliers.

“We expanded the number of products twice in autumn 2018 from ten to over fifty, and that clearly boosted the support: in recent months, the monthly bonus sum has amounted to as much as 100,000 euros. We must thank both the companies involved as well as our active customers for this. By combining our forces, we can do more,” says Akseli.

All in all, the amount of additional support to food producers has totalled almost 1.5 million euros since the operating model was first introduced in autumn 2015.

What is 'Thank the Producer'?

K Group’s 'Thank the Producer' operating model gives consumers the chance to make value-based choices and buy Finnish products, while we also contribute our share. Consumers may pay a slightly higher price for the products, thus enabling K Group to pay additional support to the food producers. K Group pays the extra sum to the food producers via suppliers.

K Group’s recipe for a better workplace: a culture of appreciation of diversity

Responsibility for personnel means not only taking care of employees’ wellbeing and safety but also greater appreciation for diversity, inclusion and equality.

A survey commissioned by the Association for Finnish work, Ruokatieto association and Finnish Glasshouse Growers’ Association shows that during the coronavirus epidemic, the majority of Finns want to buy products and services that provide work for Fi...

According to its new climate goals published in the spring, K Group aims to be carbon neutral in 2025 and reduce emissions to zero by 2030. Matti Kalervo, Vice President for Corporate Responsibility at Kesko, tells us more and how the goal will be ac...

21.08.2020 08:13
K Group to introduce the first purchase data-based nutritional calculator in the Nordics

K Group’s K-Ostokset service will soon provide customers with data on the nutritional values of their purchases from K Group grocery stores. The new feature, to be introduced before the end of the year, will allow K Group customers to examine their c...

The more than 40,000 solar power panels installed on the rooftops of K Group stores produced a record 3,000 MWh of pure solar electricity in May and June this year. When conditions are right, solar power can cover the majority of a store’s daily elec... 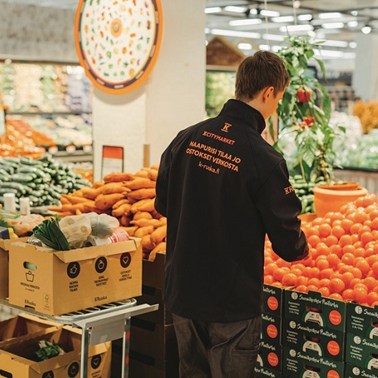 At their highest, monthly visits to K Group’s online grocery stores increased by over 800%* during the coronavirus epidemic restrictions this spring. In addition to an increase in user numbers, changes could also be seen in ways people use online gro...

The K Fishpaths collaboration between WWF Finland and K Group enters its fourth season with fry observation conducted at previously restored locations. If the Covid-19 epidemic allows, restoration work with volunteers will continue in the autumn.

05.06.2020 16:25
The Association for Finnish Work and K Group join forces to promote Finnish work – over 100 companies to take part in a national campaign

Little Big Deed: When you believe in someone, good things happen

Hanna Mattelmäki, the retailer of K-Market Mestari, sees helping employees move forward on their career paths as her duty. When her employee Vasiliki Metaxa told Mattelmäki that she would not be able to study for the degree she had hoped for, the K-r...