School attendance opens up doors to a better life

12.04.2017
The joint project of Plan and Kesko in Thailand shows that change is possible. In the lives of the children of Cambodian migrant families working in the Thai fish industry it means that already nearly 100 children now attend Thai schools daily. No more than two years ago, it was something of which undocumented parents from poor conditions could only dream. 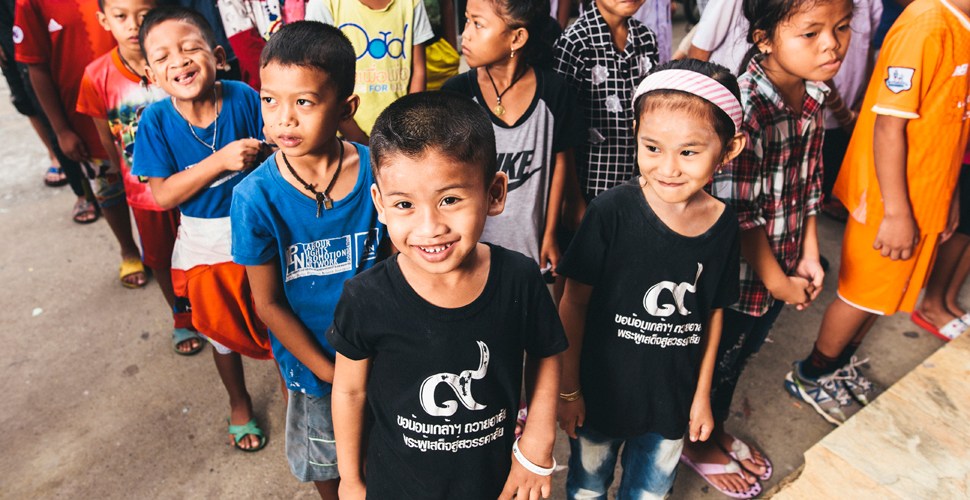 Pao picks up her 7-year-old son on her bike at their dwelling in a fisher community. The pink learning centre is not far away and when they arrive, teachers are waiting for them. This morning, he only stops at the learning centre, because he is already a real schoolboy and has promised to show us around his school. 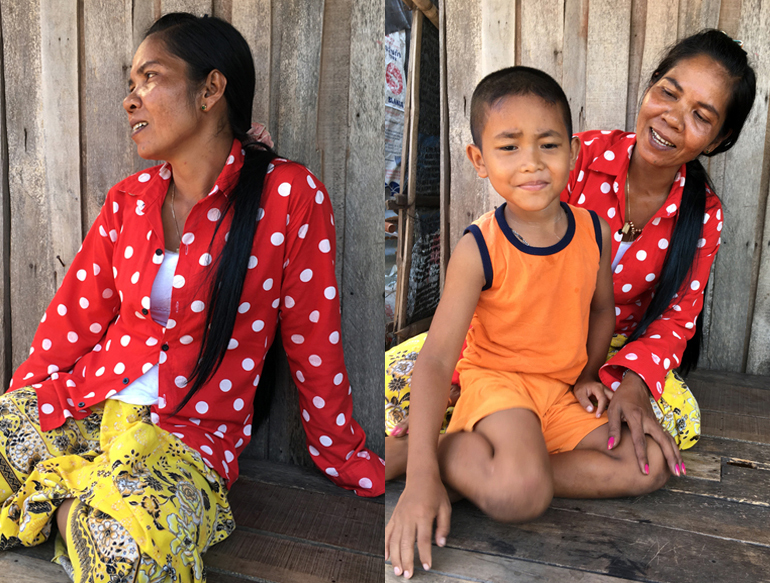 The Cambodian Pao has been working as a fish sorter in Thailand for as many as 10 years. It was not possible for her 16-year-old daughter to go to school, so Pao is happy that her 7-year-old son attends school daily.

For two years, Kesko has contributed to the financing of Plan International’s Seas of Change project with the Board’s donation funds. In order to provide Cambodian migrant workers’ children with capabilities for applying to school in Thailand, learning centres were established in the Trat and Rayong provinces in Eastern Thailand two years ago. The Labour Rights Promotion Network Foundation (LPN), Plan’s local partner organization that supports migrant workers’ families and helps their adaptation to Thailand, has played an important practical role.

“The learning centres provide pre-school education to those 4 – 14-year-olds who are not yet ready to apply for the public Thai schools. Here we teach them Thai and English, mathematics, general knowledge and life skills. Children usually attend a learning centre for a year, after which we can help them apply for the public Thai schools. We have already managed to have nearly 100 children from the learning centres accepted to schools. Now that the new school year starts in May, we hope to increase that number,” says Dawan Konthong, LPN Project Coordinator. 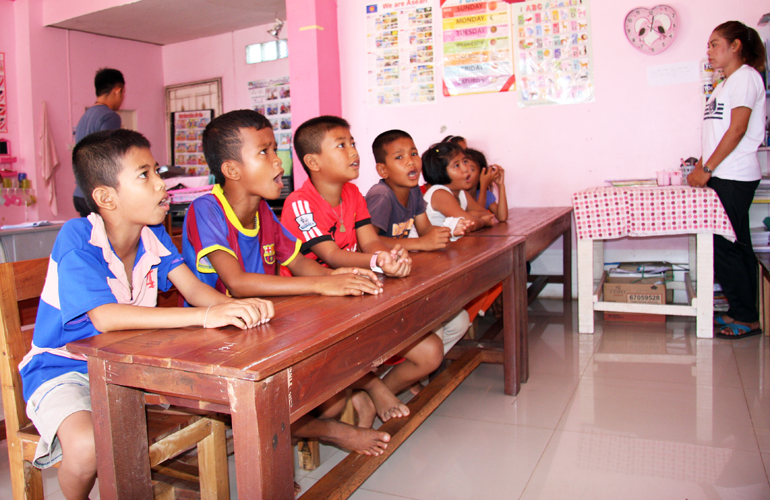 During the time during which Plan, Sida and Kesko have had cooperation, over 350 children have been registered in the learning centres located in the Trat and Rayong provinces. Thai and English, mathematics, general knowledge and life skills are studied at the learning centres. 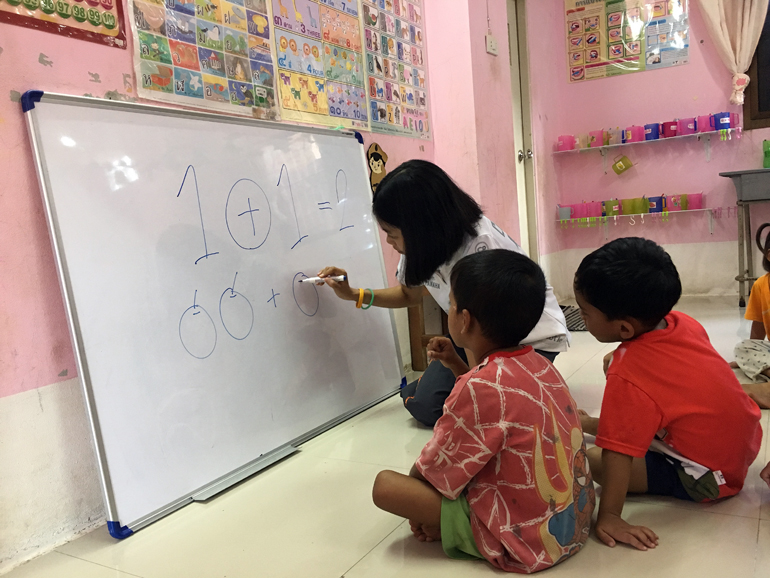 The basics of addition were practiced in the maths class at the learning centre. 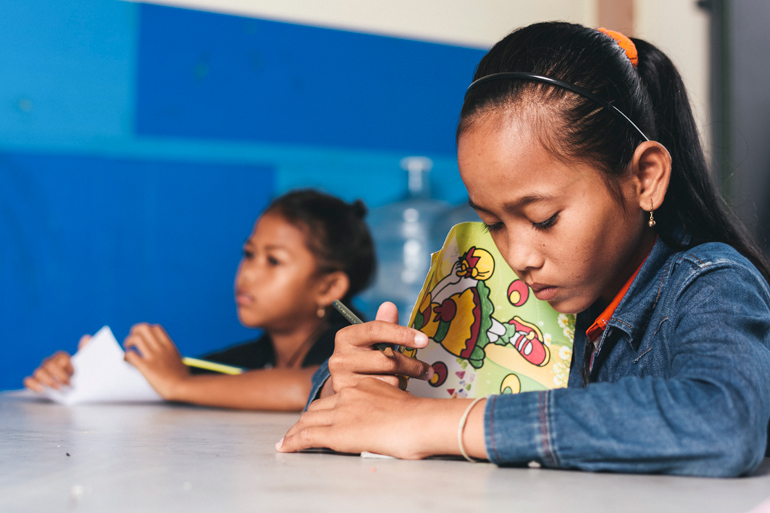 Cooperation between Plan and Kesko started as a research project three years ago. From Plan’s side, the impetus for cooperation was the awareness of the weak position of Cambodian migrant workers’ children. Because the parents are undocumented, the families don’t have access to the social support and security provided by the state. If they fall ill, they cannot go to the doctor, and their children have difficulties in being accepted to school in Thailand. Some children look after their younger siblings at home while their parents are at work, some have to work sorting fish.

”Our work involves a lot of engagement with the families and the authorities. The parents don’t necessarily know that their children could go to school in Thailand. Especially girls are often expected to take care of their younger siblings in the fishing communities while the parents are working at the fishing ports or fish factories,” says Ossi Heinänen, Secretary General at Plan International Finland. 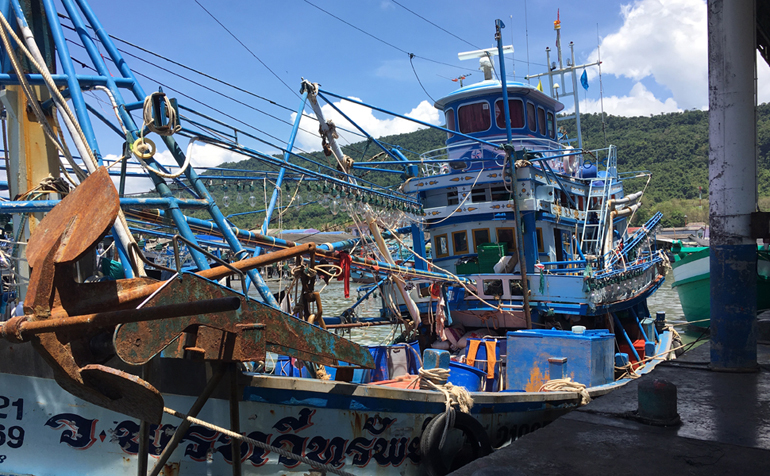 Kesko started cooperation with Plan because it wants to take responsibility for responsibility of its supply chain. Thailand is classified as a high-risk country, in other words, as a country where there is a high risk of human rights violations. Kesko imports mainly canned fish and fruit into Finland from Thailand; in 2016, the imports were valued at €6.1 million.

Matti Kalervo, the Kesko Vice President for corporate responsibility, sees that cooperation between the organisation and the company increases transparency.

”Assuring the social responsibility of our own brand products is very important to us, which is why our focus in the cooperation is on the supply chain of Pirkka products. Thanks to Plan’s local connections, we have been able to get to know our supply chain further, down to the fishing communities. By supporting the protection of migrant workers’ families and children, we can prevent human rights risks in our supply chain,” says Matti Kalervo. 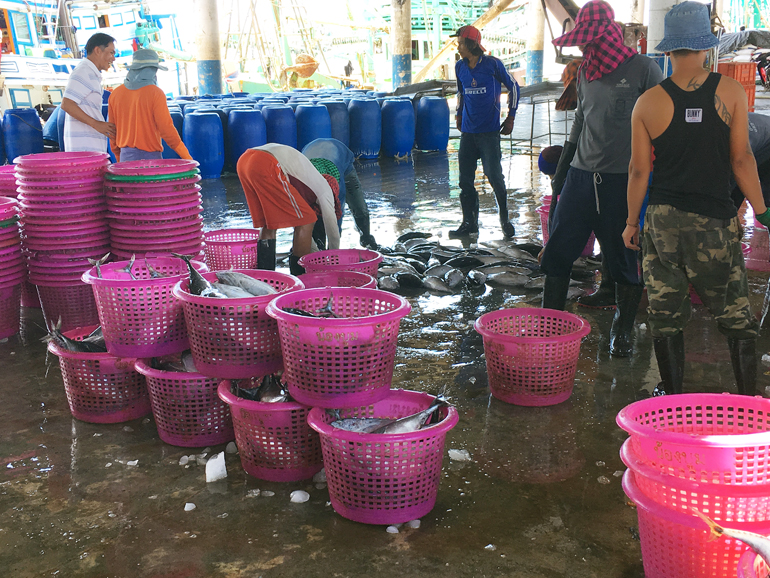 School provides knowledge and skills for a good life

Our guide took us to his school, which has already accepted 35 migrant workers’ children as pupils. We met some of the pupils and Suntharee Prayat, the school vice principal. 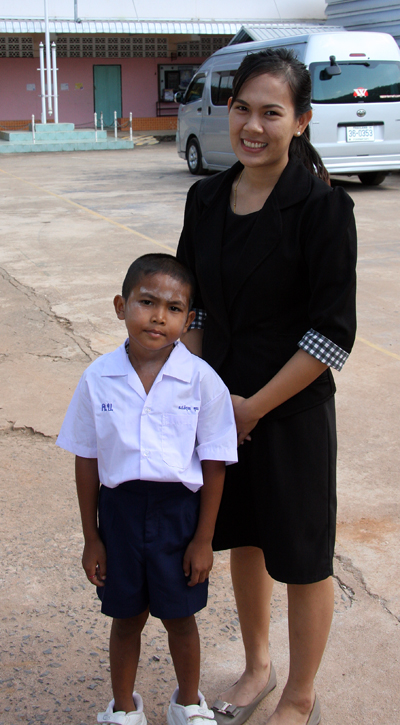 Our 7-year-old guide, who has advanced from a learning centre to the school's kindergarten class, proudly showed us around the school with his kindergarten teacher Phuangphaka Phanitnawa.

The school, situated in the Trat province, has around 600 pupils from pre-school age to around 13. They attend school daily from 7 to 16, six hours of which are theoretical subjects and the rest is music and other arts subjects. The school also gives swimming lessons in their own swimming pool. The ability to swim is very important indeed for the children living by the fishing port.

”Fish workers’ children have adapted to our school just fine and done well in their studies. Because many of them haven’t attended school before, they often start from a class lower than their peers,” says vice principal Suntharee Prayat, who has taught at the school for over 30 years.

The children are also keen to learn and they told us that school is fun and that they have learnt a lot. 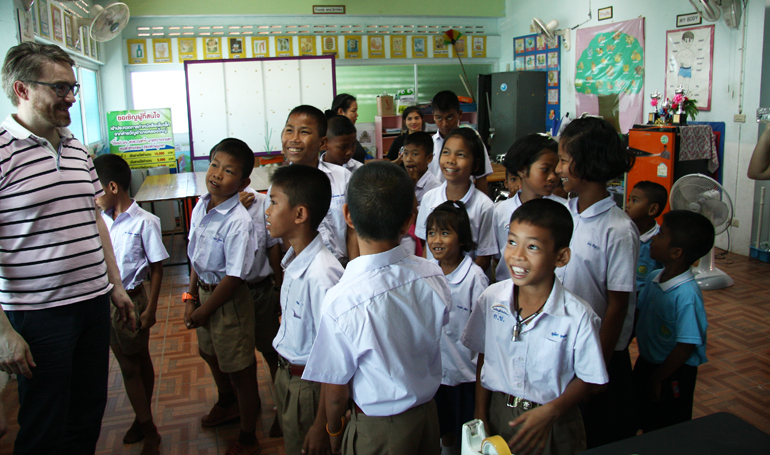 The children were very interested in the visitors from the far-away Finland and had a lot of questions: What is snow like? Does it snow every day? How can you play football in the snow? Pictured with children is Ossi Heinänen, Secretary General at Plan International Finland. 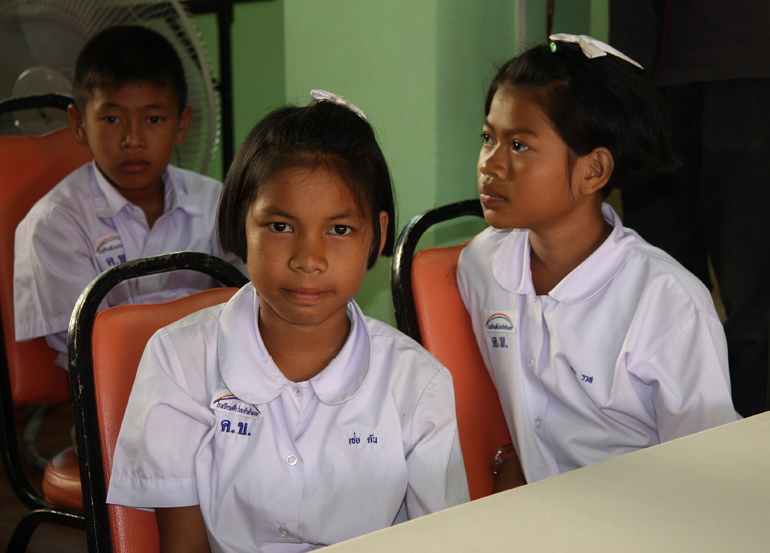 We asked the children about their plans for the future. Boys were interested in a soldier’s career, and some of them wanted to become astronauts or to work at a company. One of the girls’ dream jobs was doctor. Plan works especially for girls’ rights, because the education of girls is one of the best ways in which to reduce poverty. 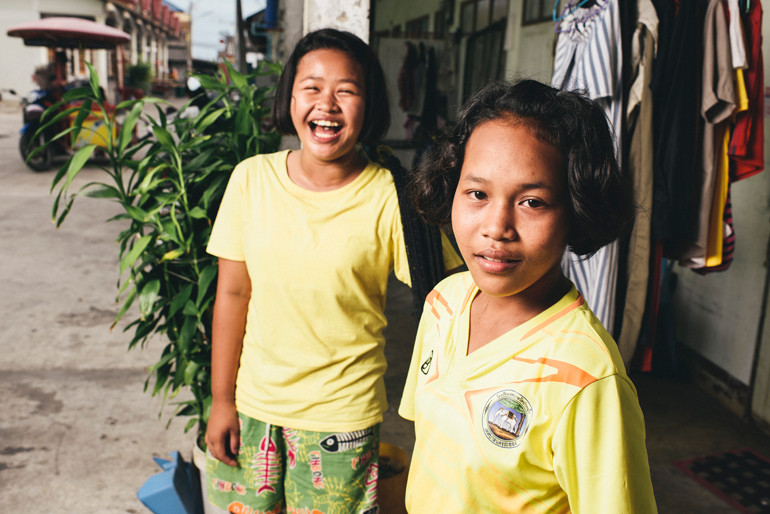 Nid (left) and Panya are friends and in third grade at school. Attending school is not self-evident for them: Nid is the youngest of six and the only child in her family who has been able to attend school. Some of her older siblings live in Cambodia, some work on fishing vessels.
Photographer: Benjamin Suomela

Thanks to the cooperation between Plan, Kesko and other donors, nearly 100 migrant workers’ children in the Trat and Rayong provinces already attend a Thai school daily.

”Education is one of the most effective ways in which poverty can be prevented from passing to future generations. Education provides knowledge and skills for a good life and increases income. When children are able to attend school, they are most likely to have their children go to school when the time comes”, says Ossi Heinänen, Secretary General at Plan International Finland.

Kesko and Plan International Finland implement the project in cooperation with Plan International Sweden as a part of a bigger project in Thailand and Cambodia funded by the Swedish International Development Cooperation Agency SIDA and Richard and Helen DeVos Foundation in the USA. The joint project will continue until 2018. The aim is by then to integrate the learning centres into the normal operations of Thai schools.

Read the previous news stories about the cooperation between Plan, Sida and Kesko:

K Group was the only large operator in the Finnish grocery trade to increase its market share in 2020. K Group’s market share grew by 0.4 percentage points, and now stands at 36.9%. The year was particularly strong for the K-Citymarket chain, where s...

Kesko Group's sales totalled €797.9 million in February 2021, representing an increase of 3.0% in comparable terms on the previous year.