11.12.2017
In August 2017, K Group and WWF initiated a multi-year collaboration to save endangered migratory fish in Finland. Already, the campaign has produced tangible positive results. During the autumn, nine barriers blocking fish passage were removed from rivers and streams around Finland, and 40 new spawning beds were created. The collaboration will continue and expand in 2018. 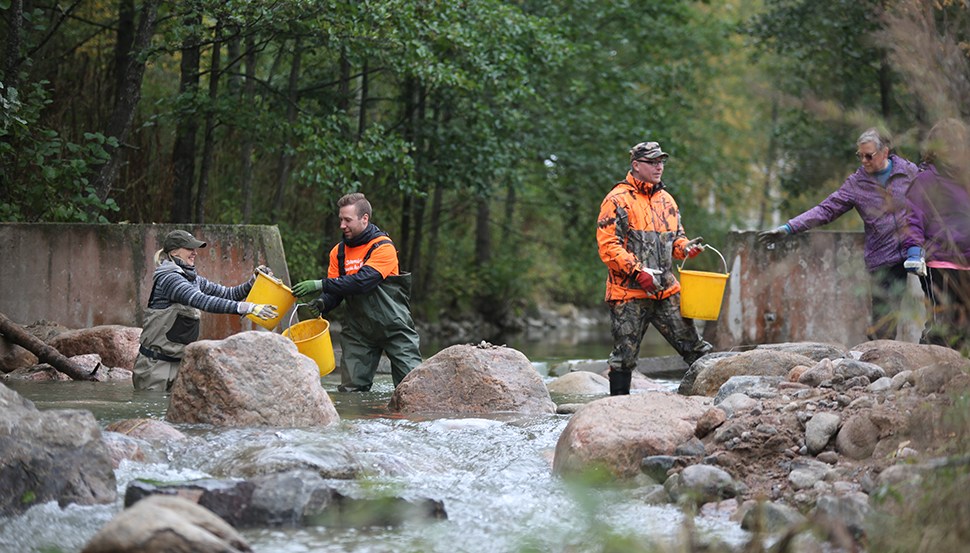 The situation is dire for Finnish migratory fish as barriers in rivers and streams block their passage to suitable spawning grounds. As a result, the sea trout, for example, is now even more endangered than the Saimaa ringed seal. K Group and WWF Finland joined forces this autumn to the help the fish, mapping out and removing unnecessary structures such as culverts that prevent migratory fish from rising upstream. They also hope to increase awareness about Finnish migratory fish.

“During the autumn, we removed nine structures that were blocking passage and thus gave migratory fish access to dozens of kilometres of new living and spawning grounds. The best moment was in Imatra, where the volunteers were still at work when the first trout swam up past the removed barrier,” says Liisa Rohweder, Secretary General of WWF Finland.

The work is carried out in collaboration with local organisations and agencies, landowners, K-retailers and volunteers. An encouraging number of volunteers showed up for the first event, and almost 400 people from around the country have now signed up for volunteer work via the campaign page.

"Volunteers have been doing this important work for some time now. It has been great to witness first-hand this autumn the strong commitment to volunteer work in Finland. As the most sustainable trading sector company in the world and a responsible seller of fish, we want to invite all Finns to take part in the work to save our endangered migratory fish,” says Matti Kalervo, Vice President of Corporate Responsibility at K Group.

Sites for 2018 currently being mapped out

The work slows down at the end of autumn due to the natural cycle of migratory fish. For example, Finnish trout spawn in October and November, and the flowing rivers and streams need to be protected from any unnecessary disruptions. Work will resume again at the end of next summer, on an even wider scale. Volunteers can already sign up to help and landowners can suggest sites on their property where barrier removal is needed at Kesko.fi/kalapolut.

“During the winter, we will choose which sites to restore next summer and plan the work. Local organisations and agencies, K-retailers, and private citizens have already provided many suggestions for suitable sites, but we happily welcome more," says Elina Erkkilä, Conservation Officer at WWF Finland.

The sales of Kesko Group’s continuing operations in August 2020 totalled €885.9 million, representing an increase of 1.8% in comparable terms.

17.09.2020 19:00
Kesko continues the implementation of its growth strategy in Sweden by acquiring Bygg & Interiör stores for professional builders

The sales of Kesko Group’s continuing operations in July 2020 totalled €970.7 million, representing an increase of 2.4%. In comparable terms, sales grew by 6.4%.

Profitability improved thanks to fast response to exceptional circumstances and well-functioning strategy.

Kesko Corporation's subsidiary Byggmakker Handel AS has agreed to acquire Carlsen Fritzøe Handel AS, a Norwegian operator in the building and home improvement trade with net sales of approximately €201 million in 2019. The acquisition strengthens Kes...

The Confederation of Finnish Industries (EK) and ten leading Finnish companies are joining forces to try and help Finland return to a more normal life as safely as possible. The “Enter 2020” campaign by EK and the organisations will gather best pract...

The crisis brought on by the novel coronavirus has not led to food shortages in Finland. The organisations operating in the food business in Finland engage in voluntary cooperation to prepare for such exceptional circumstances. K Group’s strong empha...

K Group has a unique perspective into how Finns eat, build and drive. During the coronavirus crisis, this has meant strong surges in demand in some areas, steep declines in consumption in others. Finland is still in the midst of a crisis, and no one ...